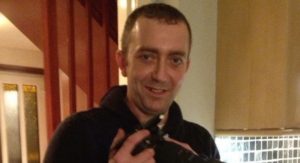 A “doting father” died following a hammer attack by a convicted drug trafficker after running up a debt he was unable to pay.

William Richardson turned up at a house in Kelty and repeatedly assaulted Colin Oliphant (pictured above) before driving off and leaving his victim with fatal injuries.

Richardson (35), who later handed himself in at Dunfermline police station, has admitted culpable homicide.

Richardson, who was jailed for heroin supply in 2013, drove off from the house with others and was described as acting “full of bravado”, the High Court in Edinburgh heard.

Advocate depute Bill McVicar told the court, “The now deceased quickly began to struggle to breathe with his face swelling and asking for help, pointing to his neck.”

An ambulance was called but the attack victim’s face, throat and limbs continued to swell after he was placed in the vehicle.

Mr Oliphant went into cardiac arrest and despite efforts to save him he died. The cause of death was later given as complications of chest trauma.

The prosecutor said the fatal injury inflicted on Mr Oliphant, the father of a daughter, was a fracture of a rib on the left side of his back which had splintered the bone and punctured a lung.

Richardson , formerly of Glasgow, admitted a charge of culpable homicide in the attack at Keltyhill Avenue on 6 September last year.

After the assault Richardson had returned to a house in Ballingry, where he was living with a woman.

He went to Dunfermline police station on 8th September and said he wanted to speak to detectives before telling an officer, “There were witnesses there. I’ve never done an assault before.”

The judge, Lord Woolman, deferred sentence on Richardson for a background report and remanded him in custody.

Following the tragic death, the victim’s family said, “Colin was a doting father and much loved by those who knew him. He will be greatly missed.”