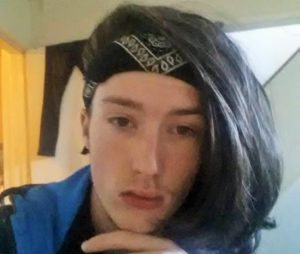 A slezaebag, who climbed into the home of a young woman and stole her underwear, has been sent to jail for 18 months.

Kieran Watson (21) used a ladder to get into the bedroom of a female he knew, when she was elsewhere in the house.

The victim returned to her bedroom to find the window open, blood spattered around the room and the bag of underwear missing.

Watson had committed a similar crime previously and was on a programme for sex offenders.

He previously admitted that on 22nd December he broke into a house in Kirkcaldy and stole a quantity of clothing and underwear.

Depute fiscal Kysten Buist told the court, “The victim was at home at the time of the offence. In the early hours of the morning, she was in another room when she heard a clicking noise.

“She thought it was someone trying to open her bedroom window. She went into the room and found the window open. There was blood on the bed and the window ledge.”

She saw that missing from the room was a bag of clothes and underwear which was to be taken for re-cycling.

A ladder had been moved from its storage area and was up against the wall next to the window.

Police carried out tests on the blood and it was matched with Watson’s.

He initially claimed he had been working at the time. He said the female lived near him, that they went around in the same circle but that he was not attracted to her.

He later told police “I don’t remember doing it.”

The court was told Watson was already on a community payback order.

He said Watson was currently on the Moving Forward Making Changes course and asked for him to remain in the community. “That in the long run would be to the benefit of society,” he added.

However, Sheriff Charles MacNair told Watson, “People are entitled to feel secure in their property and the impact of having their intimate clothing rummaged through by a stranger is something they are entitled to be protected from.”