Hospital rapist who was freed on technicality is back behind bars 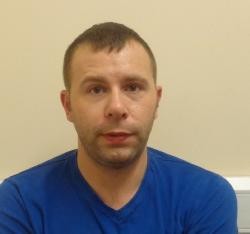 A rapist, who was freed on a legal technicality, has been convicted for a second time of a catalogue of sexual abuse over a 14-year period.

Andrew Ferguson (37) raped a woman at a nurses’ residence at Ninewells Hospital.

He then went on to rape another woman years later at houses in Cairneyhill and Inverkeithing.

Ferguson, who forced his two victims to give evidence twice, has now been jailed for six years.

His first conviction in 2016 was quashed on a legal technicality but after a second trial at the High Court in Glasgow earlier this year, he was again found guilty.

Lord Matthews told Ferguson: “You were convicted for a second time of a catalogue of sexual offences.

“You were originally sentenced to eight years and appealed against sentence.

“That was successful, there was a retrial and you were convicted once again.”

The judge said an appeal court decision meant he was unable to sentence him to more than eight years.

As Ferguson had spent almost two years in jail before he was released, the judge said six years was the maximum sentence the court was allowed to impose.

Ferguson, from Clackmannan and previously of Cairneyhill, attacked his first victim at the nurses’ residence at Ninewells Hospital, Dundee, in 2000.

The court heard he went on to rape another woman years later at houses in Cairneyhill and Inverkeithing.

Ferguson claimed any sex was consensual but a jury convicted him of seven charges, between 2000 and 2014, including rape and sexual assault.

Ferguson was again placed on the sex offenders register.