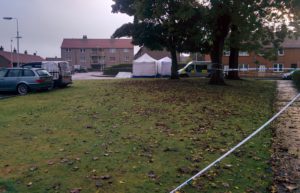 A Kirkcaldy man, who stabbed his victim to death in a dispute over drugs, has been warned to expect a long prison sentence.

James Beveridge, a father-of-one, was found injured after police were called to reports of a disturbance at Farne Court, shortly after 6pm on a Saturday evening.

He was rushed to the Victoria Hospital but died hours later.

The High Court in Edinburgh was told Paterson had fallen out with Mr Beveridge because he wanted to buy drugs on credit.

Police also suspected that Paterson wanted a refund over “dud” Valium tablets which he had previously purchased from the victim.

For the prosecution  Ashley Edwards QC told the court that Mr Beveridge sustained cuts to his head and a wound to the left side of his neck.

Ms Edwards added, “Despite the injury he had sustained, the deceased apparently managed to get to his feet telling the accused that ‘You’re going down for a murder all over a tenner.’”

The judge gave his condolences to members of Mr Beveridge’s family who were sitting in court.

He told Paterson, “You have pleaded guilty to a grave crime. There are no circumstances which can justify the taking of another person’s life.

“It is inevitable that a substantial custodial sentence will follow.”

Sentence was deferred for reports until 11th August at the High Court in Glasgow.