Gherkins blamed for drink-driver being pickled 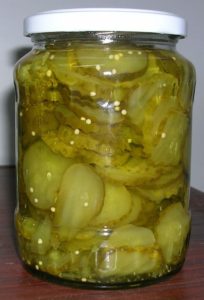 Eating a jar of gherkins on top of a bottle of beer has been blamed for a drink-driver’s high breath-test reading.

Marcel Furtuna said he only had one bottle of lager before he was caught driving at almost three times over the limit.

When a sheriff pointed out that one bottle would not have resulted in the high reading, Furtana’s solicitor said his client had almost knocked back a jar of picked gherkins.

Furtuna (pictured below) claimed he only drank one bottle of Peroni lager in a pub but also downed a jar of pickled gherkins.

He admitted that on 1st June in Queensferry Road, Rosyth and elsewhere, he drove after consuming excess alcohol. His reading was 59 microgrammes of alcohol in 100 millilitres of breath.

Defence solicitor Ian Beatson said his client had been in the UK for five years and came to Scotland a year ago after working in Surrey. He currently works at the Marine Harvest fish processing factory in Rosyth.

“He says he wasn’t aware, although he should have been, of the drink-driving limit in Scotland,” Mr Beatson continued.

He said his client had been at a bookmaker’s shop, had also been playing bingo and then had gone to a pub after hearing music coming from it.

He said his client only had one bottle of Peroni, which the solicitor said was not a drink he was a familiar with.

However, Sheriff Craig McSherry said it was “within judicial knowledge” that one small bottle of Peroni would not result in such a high reading. “I think he had a few more than that,” added the sheriff.

Mr Beatson said, “I don’t know if I’m helping his case but he did eat a full jar of gherkins as well.”

“What with white wine vinegar?” asked the sheriff.

He fined Furtuna £500 and banned him from driving for a year.