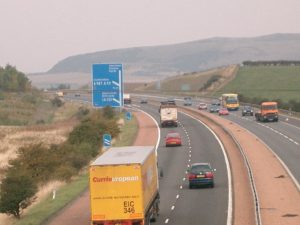 A woman was almost four times over the limit when she drove in the wrong direction on a motorway in Fife.

Claire Coull weaved from lane to lane as she headed towards oncoming vehicles on Hogmanay.

Coull (32), of Inverness, appeared in the dock at Dunfermline Sheriff Court.

She admitted that on 31st December on the M90 she drove a car dangerously, drove on to the motorway on the wrong carriageway, drove towards oncoming vehicles, weaved between lanes and exited from a slip road without slowing or checking for oncoming vehicles.

She also admitted that she was drink-driving on the M90 and A92. Her reading was 83 microgrammes in 100 millilitres of breath, the limit being 22 microgrammes.

Sheriff Charles MacNair said he would not be sentencing until he had reports on  Coull. “Not for drink driving the wrong way on a motorway,” he added.

He told Coull, “It seems to me you were fortunate not to be on indictment.”

Sentence was deferred until 5th July and Coull was made subject of an interim driving ban with immediate effect.