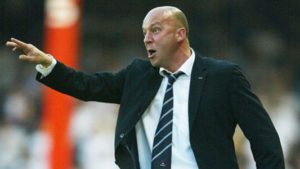 Former football star Neale Cooper has died at the age of 54.

He was taken to Aberdeen Royal Infirmary after he was found collapsed in the stairwell of flats in the city early on Sunday morning.

Neale was part of the great Aberdeen team which won the European Cup Winners Cup in 1983. He also played for Aston Villa, Rangers and Dunfermline before managing Ross County, Hartlepool and Gillingham.

His death is not being treated as suspicious but police say their inquiries are continuing.