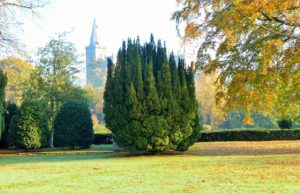 A Fife man, confronted by paedophile hunters in Dunfermline’s Pittencrieff Park, has appeared in court.

The ‘sting’ incident on Saturday night was shown live on social media and has been viewed more than 150,000 times.

David Jackson (36), from Kelty, is accused of going to the park with the intention of having sex with someone he believed was a boy.

It is also alleged he sent sexual images to someone he believed to be a young boy.

Jackson appeared from custody at Dunfermline Sheriff Court today and denied the three charges he is facing.

It is alleged that on various occasions between 15th April and 26th May he sent sexual images and a video containing sexual images to a person posing a child under the age of 13.

It is also alleged that on various occasions between the same dates, he sent sexual comments to someone he believed to be a child under 13.

A third charge alleges that on Saturday he went to Pittencrieff Park with the intention of meeting a person he believed to be under the age of 16 and intended to engage in unlawful sexual activity with him or in his presence.

Jackson was allowed bail by Sheriff Linda Smith with special conditions. He cannot have any unsupervised contact with children under the age of 16 and has had internet restrictions imposed.

A trial date was set for 3rd September.