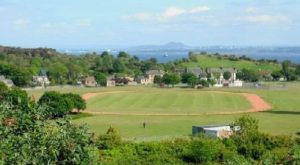 A businessman, who spent his lunch hour dressed in a tutu skirt, tights and wig before shocking Fife residents with indecent antics, has returned to court.

I.T. specialist John Suares drove to what he thought was a “quiet spot”.

However, his chosen location in Inverkeithing was a residential area and alarmed locals called police when they saw Suares with a sex toy clamped between his legs.

Suares, (43), from Kilsyth, previously admitted that on 28th March last year at Ballast Bank, Inverkeithing, he committed an act of public indecency by holding a sex aid between his legs whilst dressed in female clothing.

He returned to the dock at Dunfermline Sheriff Court after having had his sentenced deferred for a year for good behaviour.

The incident occurred at around 1.40pm when two residents looked out of their window and saw what they thought was a female sitting on a metal fence next to the embankment.

The witnesses saw Suares had a sex aid held between his legs. He then removed his wig and drove off in his blue Mazda car. The registration number was noted and the police contacted.

On 30th March police officers spotted the car being driven on the A985 at Kincardine and stopped Suares.

The court was told Suares had been of good behaviour for the past year and he was admonished by Sheriff Allison McKay.