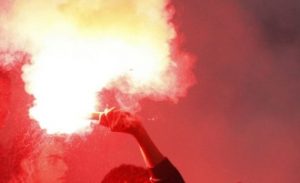 A hooligan who lit a smoke bomb during a match at East End Park has been banned from football grounds for a year.

A court was shown CCTV video of the incident with other fans seen stumbling over seats as they tried to get away from the smoke.

A sheriff commented that it was fortunate there were not many fans in the stand at the time.

The fan waving the red flare was John Semple, who was in Dunfermline to support his side Hamilton Accies.

The incident led to Semple (18), of Denkeld Place, Hamilton, returning to Dunfermline to appear at the sheriff court.

He admitted that on 11th February at Dunfermline Athletic Football Club, he conducted himself in a disorderly manner by igniting smoke devices and waved a smoke device in the air before dropping it to the ground, kicking it and committing a breach of the peace.

Depute fiscal Carrie Stevens said the incident took place in the east stand at East End Park where about 270 Hamilton Accies fans were grouped for the match.

At about 3.45pm Semple was seen hiding behind two friends, kneeling down then getting up with a flare emitting red smoke.

He was holding it up in his right hand and waving it before throwing it to the ground.

“People around him were covering their faces because of the smoke. He had been seen by a security officer who viewed the CCTV and was asked to leave the football match, said the depute.

“He later became aware that police wanted to speak to him and went to Hamilton police station.”

The court was then shown the CCTV of the incident.

Defence solicitor Alexander Flett said his client’s position was that others had taken the object to the stadium then encouraged him to light it.

“This thing may happen on the Continent on a regular basis but he accepts he shouldn’t have done it here,” Mr Flett went on.

The solicitor added that Semple now realised attending football matches was getting him into trouble and he had stopped going. The football banning order sought by the Crown was not opposed.

Sheriff Charles MacNair said, “From the CCTV it’s clear that this did have an impact on those around you. People are seen falling over trying to get away.

He added, “Smoke grenades are not safe things to play with. They should not be used in the confined space of a football crowd.”

The sheriff imposed an eleven-month restriction of liberty order and a one-year football banning order.