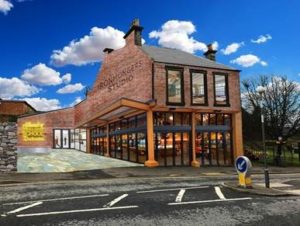 The Alhambra Theatre Trust have announced an exciting new expansion, with planning permission being lodged to create a new performing arts centre encompassing a state of the art 200-seat studio theatre and art house cinema, and a purpose-built headquarters for the Alhambra Stage & Dance School.

Situated in the long vacant building at 62 New Row, the plans also include suites of rehearsal rooms, an administration block, and retail/restaurant space.

The building is fondly recalled locally as Watt & Dewar’s Ironmongers, and before that as the printworks for the Dunfermline Press and originally as the first Dunfermline Carnegie Music Institute until 1936.

Interior design and layout will be heavily influenced by the world famous Wilton’s Music Hall in London.

The new state of the art performance space will be carefully woven into the original fabric of the building and retain the historical significance of a building that has played an important role in Dunfermline life for over 100 years. The aim is to create a versatile, striking and unique venue, which can be an attraction in its own right.

The performance space within The Ironmongers Studio will offer an innovative alternative to complement the existing space on offer within the Alhambra Theatre or Carnegie Hall, and will also act as a permanent headquarters for the blossoming Alhambra Theatre Stage & Dance School. 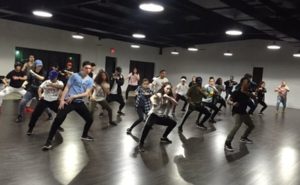 The outdoor spaces surrounding The Ironmongers Studio are intended to also be used as performance spaces and could be used to host summer outdoor film screenings.

A smaller performance space, with fully flexible staging and a seating capacity of up to 200, will provide opportunities not only for the Alhambra Stage & Dance School but for many smaller, local groups to produce and perform a wide variety of works, with an emphasis on pushing boundaries.

The various spaces available will see The Ironmongers Studio act as a home in Fife for innovative young writers and performance and dance groups.

The Alhambra Theatre Trust’s long held ambitions to create a 21st century version of a traditional repertory company, similar to that which creates and presents new and innovative work at Dundee’s Rep, could be realised within The Ironmonger’s Studio.

The repertory theatre’s work, alongside developing new work, could also be the base for an annual “Summer Series” similar to that presented so successfully by Pitlochry Festival Theatre, an annual event with significant tourist appeal.

The Alhambra’s existing connections with National Theatre of Scotland and Dundee Rep will also offer scope for a series of informal performances and masterclasses.

Since its inception the Alhambra Theatre Stage School has grown into one of Fife’s biggest and most innovative stage schools. Providing classes in dance, singing and drama to a wide age group, The Alhambra Stage & Dance School is a place for everyone to practice and learn performance skills in a safe and friendly environment.

It is also somewhere for students to express themselves, be creative, interact and develop skills for the rest of their life. The Alhambra Theatre Stage & Dance School grew from the initial two week summer school experience but has now arched out into a wide-reaching range of activities including singing, dancing, acting classes for children, classes for adults, a community rock choir and more, with 350 students attending classes on a weekly basis.

A permanent, purpose-built base at The Ironmongers Studio would see the Alhambra Stage & Dance School move forward with ambitious plans to move into fields such as Dramatherapy and offering BTEC qualifications.

The Alhambra management believe, “A purpose-built facility offering qualifications of this nature gives a wonderful opportunity to stop the current exodus of talented youngsters from Fife to similar centres in Edinburgh or Glasgow.”

Gavin Dickson, principal of the Alhambra Stage & Dance School said, “I am delighted at the prospect of having a permanent base for the Alhambra Theatre Stage and Dance School. The facilities will enable us to expand our range of classes and also offer full time courses, utilising our team of 14 tutors in the performing arts.

“The studios will provide us with unrivalled, dedicated Dance and drama and voice facilities in Fife, and with the location, we are also able to give students access to the studio and main stage at the Alhambra theatre for training, and incredible performance opportunities.”

Councillor Jean Hall-Muir added “”The vision for the Ironmonger Studio is yet just another example of ambition planning that is going on throughout Dunfermline’s creative community and dovetails wonderfully with the larger Tourism and Heritage Quarter developments.

“Building on ten years of growth of the theatre programme and five years of the Theatre School, it is the next logical step for the Alhambra’s development, and a most welcome resource for our local children.”

A spokesperson for the Alhambra added, “The projects above are designed to further enhance Dunfermline’s already strong cultural offering, and are intended to act as the catalyst for the wider held ambitions of Dunfermline Performing Arts.

“The Ironmongers Studio will be superbly located, sitting alongside Fife’s premier theatre, to complement and add to the burgeoning Heritage Quarter, as well as Dunfermline’s blossoming cultural offering, highlighted by the ongoing success of Fire Station Creative, the newly opened Dunfermline Carnegie Library & Galleries, the Carnegie Hall, the newly launched Outwith Festival, and more.”