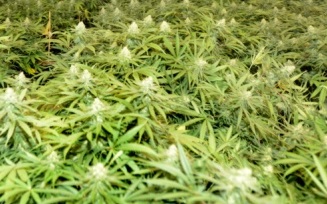 A Fife man, who had a £20k cannabis cultivation in his home, has been jailed for nine months.

A sheriff previously said he was “thunderstruck” by the Crown’s decision to accept a Christopher Hagan’s not guilty plea to producing cannabis.

This was despite a large plantation being discovered by police during a raid on Hagan’s home.

Two tents were set up and plants were at various stages of growth, Dunfermline Sheriff Court was told.

Hagan (43), of Robertson Road, Dunfermline, admitted that between 1st April and 31st August last year, he was concerned in the supply of a controlled drug, cannabis.

However, his not guilty plea was accepted to a charge of producing cannabis at his home between the same dates.

When he answered the door, officers could detect a strong of cannabis and Hagan said he regularly smoked it.

A warrant was obtained and when police searched the house they found cannabis with an estimated street value of £20,000.

Hagan told them it was for his own use, that he also exchanged it for heroin and that he gave it to other medicinal users for a “nomimal” fee.

Defence solicitor Stephen Morrison said, “He has a number of ailments which he says are helped by him taking cannabis.”