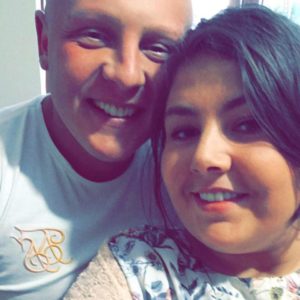 A Fife couple told a pack of lies after a woman was knocked down and killed.

In the aftermath of the pensioner’s death, Tiegan Carruthers falsely claimed she had been behind the wheel.

In fact, her partner Gregg Anderson (26) was speeding and driving without a licence or insurance when he ploughed into 68-year-old Linda Dunn in Leven town centre last October.

Carruthers (19), a dental nurse, told police she was driving in blinding sunlight. She claimed, “I couldn’t see anything. Then she hit off the bonnet first, then the windscreen, then off. I went into shock and my partner grabbed the wheel and pulled the car to the side.”

Carruthers then callously made a phoney Facebook post claiming that the victim would “be in my heart the rest of my life” as she tried to avoid suspicion being cast on her partner.

Carruthers also told insurers that she was the driver and got a courtesy car after telling them the police had said it wasn’t her fault.

Anderson, who was driving at nearly double the speed limit of 20mph, told police, “Tiegan was driving slowly perhaps at 20 mph or less because the sun was very low and dazzling.”

However, when police began looking at CCTV they realised that it was Anderson who was driving the Mazda.

And after a fresh appeal witnesses came forward and said the driver was male with a female passenger.

Warehouseman Anderson was interviewed again by police and accepted that he drove part of the car journey that day but still claimed that he was not the driver at the time of the collision.

Anderson has now admitted causing the death of Miss Dunn at the High Court in Edinburgh.

Anderson, of Alexander Street, East Wemyss, admitted causing the death of Miss Dunn by driving dangerously at excessive speed and failing to observe the pedestrian crossing Aitken Street, in Leven. He also admitted driving without insurance and a licence.

He further pled guilty to attempting to defeat the ends of justice by providing false information to police stating Carruthers was the driver in a bid to avoid detection and prosecution.

Carruthers, of the same address, admitted permitting Anderson to drive without him having appropriate insurance.

She also admitted pretending to Direct Line Insurance that she was the driver at the time of the fatal collision and inducing the firm to provide her with a courtesy car and obtaining the use of it by fraud and attempting to pervert the course of justice.

The judge, Lord Uist, adjourned the case for the preparation of background reports on the pair and imposed driving disqualifications until their date of their sentence.

He said he would continue bail until then but added: “You should each be aware that will be the day of reckoning.”