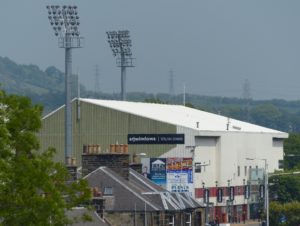 A teenage Hearts fan has appeared in court after being arrested at East End Park.

The 16-year-old youth, a Hearts season ticket holder, attended the match against Dunfermline on Saturday.

It is alleged that the teenager, from East Lothian, tried to punch a steward, resisted arrest, struggled violently with police and kicked a female officer.

The youth, who cannot be named for legal reasons, appeared from custody at Dunfermline Sheriff Court facing four charges.

It is alleged that on 18th August at East End Park he assaulted a steward by attempting to punch him on the head.

He is also accused of behaving in an aggressive manner towards stewards by lashing out at them with his arms and legs, repeatedly shouted and swore at them and police officers, made threatening remarks to police, repeatedly kicked the interior of a police vehicle and repeatedly spat within it.

It is further alleged that he resisted four police officers at East End Park by repeatedly lashing out with his arms and legs and struggling violently with them.

He is also accused of assaulting a female police officers by kicking her on the leg.

The court was told that the youth has learning difficulties and the case was continued without plea for a psychiatric assessment to be carried out.

Sheriff Simon Collins granted bail with a special condition that the youth does not attend any regulated football match in Scotland. The case was continued until 14th September.