Fife woman stabbed by neighbour who thought she was poisoning him 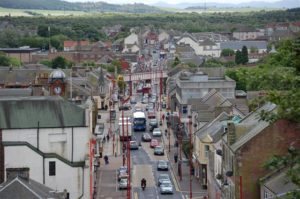 A Fife woman was stabbed by a mentally ill neighbour who thought she was poisoning him.

The terrifying incident happened as the woman was getting into her car in Cowdenbeath.

Paranoid neighbour Kevin Fairley ran at her, punching her on the head then stabbing her in the back with a knife, shouting “Take that.”

The attacker then walked calmly back into his house, passing his dad who was going out to see who was screaming.

Fairley (32), diagnosed as a schizophrenic when he was a teenager, had begged for help from his psychiatrist and others jusr days before the stabbing, his dad told a court.

Fairley faced two charges but was unfit to stand trial.

It was alleged that on 4th April, at Blamey Crescent, Cowdenbeath, he assaulted Katie Hart by striking her on the body with a knife to her severe injury.

The second charge was that he assaulted a police officer by kicking him on the body and attempting to headbutt him.

An examination of facts was held in his absence at Dunfermline Sheriff Court.

The charges were held as established by Sheriff Craig McSherry. Fairley was acquitted on grounds of insanity.

He is currently being held in a secure unit at an Edinburgh clinic.

Ms Hart told the court what happened as she got into her car that morning.

“Kevin came running at me and punched me on the head. I didn’t realise at the time he had stabbed me.

“I was screaming ‘help’ in the street. Kevin Fairley’s dad came over and then a woman took me into her house. There was blood running down my back, She put pressure on the wound and I was taken to hospital.

“It was all just a blur when it happened. A couple of days later I had bump on met head where he had punched me.”

When she gave a statement to police the same morning, Ms Hart said that Fairley had shouted, “That’s what you get. Take that.”

Ms Hart sustained a 2cm wound in her back just below her kidneys.

Mr Fairley said he thought his son was in his room when the incident happened.

“I was making a cup of tea for us then I heard screaming from outside. I thought a kid had been knocked down and went outside to see,” he added.

As he went out, his son went back into the house saying nothing.

Mr Fairley had asked Ms Hart what had happened. “She said, ‘He’s stabbed me, keep him away from me’.”

When he went back into his house, his son was in the kitchen “as if nothing had happened,” said Mr Fairley.

“I said, ‘What’s happened Kevin? What have you done?’ He said, ‘They’re trying to poison us dad with the water’.”

Mr Fairley said he attended a medical meeting with his son, his psychiatrist and other professionals less than a fortnight before the stabbing.

“At the meeting, he said to them, ‘I need help, please’. That’s not like him. He begged for help. If they’d taken him into hospital for a couple of days we wouldn’t be here today,” said Mr Fairley.