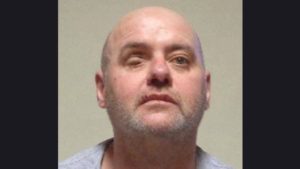 A Fife murderer who killed a 25-year-old man in a frenzied attack with a “vampire skull” sword has been jailed for at least 18 years.

Adrian Hynd (52)  stabbed Alexander Forbes more than 100 times during an attack at his home in Kirkcaldy on 2nd January.

Hynd, who claimed he acted in self defence, was given a life sentence and told he must serve at least 18 years before being considered for parole.

Hynd was found guilty after a trial at Edinburgh High Court last month of the stabbing at his flat in Victoria Road.

Mr Forbes, from Edinburgh, went back to Hynd’s flat with two other men to continue drinking after meeting during a night out.

The two other men left around 3.45am and at around 5am Hynd called emergency services claiming to have stabbed the victim in self-defence.

At today’s sentencing at the High Court in Glasgow, Lord Ericht told Hynd, “You invited various people back to your home after the pub.

“The next morning, Alexander Forbes lay dead on your floor, your ornamental collector’s sword embedded in his chest.”

Mr Forbes had ended up in Hynd’s flat after drinking in Kirkcaldy’s Windsor Bar. The trial heard the pair began a mock fight and the other two men left.

The court heard how Hynd stabbed his victim on the abdomen, buttocks, lower back and thighs. There were also 10 wounds on his face, head and neck.

He also seized his victim’s neck and repeatedly punched him on the head before stabbing him.

When police discovered Mr Forbes’s body, the weapon was still stuck in place.

A police officer told the trial that the walls, floors, and radiators of the property were covered in blood stains and that Hynd was “absolutely covered” in blood and it was “dripping from him”.

Detective Chief Inspector Keith Hardie, of Police Scotland’s Major Investigation Team, said, “Our enquiries established that Alex had been the victim of a frenzied attack and there is no doubt that Hynd, fuelled by alcohol, meant to cause Alex severe harm. We welcome this sentence and our condolences remain with Alex’s family.”