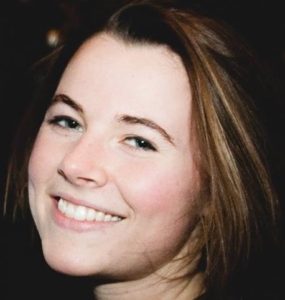 Coastguards have praised a student who ran to the aid of a girl who fell from rocks at St Andrews Castle and was unconscious.

Lucy Reis (picture above), who was heading to her graduation ball when the alarm was raised, threw off her shoes and dashed across the rocks in her ball gown to go to the rescue of the stricken youngster.

Voluntary coastguards who attended the incident, all of whom are members of staff of the university, commended Lucy’s quick thinking.

The drama unfolded as students made their way to the ball on Saturday.

Lucy (20), a 3rd year undergraduate art history and psychology student, said, “We were on Castle Sands and there were some other people on the beach and a lot of commotion and people getting upset. They were saying that there had been an accident and someone had been hurt.

“I took my shoes off and clambered over the rocks. There was a girl lying on the rocks round the corner near a pool of water. She appeared to be unconscious.

“I don’t know first aid but we thought she should be kept still. She was not responding and I checked her head for injuries.

“We were trying to get her to respond which she did after a while. She started to throw up so we turned her onto her side and kept talking to her and asking her name.”

Andrew, who graduated last week, said, “I’m very glad that we were able to help the girl and her injuries were not worse. But to be clear, Lucy really is owed more of the credit.

“She first suggested that we not move her, she stayed with this girl who we didn’t know and sacrificed time at Graduation Ball and she was extremely calm, helpful and compassionate through everything.”

Meanwhile the St Andrews Coastguard Rescue team and a helicopter were alerted and attended the scene.

The injured girl was winched into the rescue helicopter and flown to Ninewells Hospital in Dundee as a precautionary measure.

“Lucy and Andrew provided vital care in initially ensuring the casualty’s breathing was not compromised by the water,” he said.

“HM Coastguard are grateful for the time and effort provided by its volunteer rescue teams located around the country who provide this essential rescue capability.

“Importantly HM Coastguard also recognise the support given by the team members’ employers, the University of St Andrews, who allow them, when possible and at the sound of the pagers going off, to leave their jobs at a moment’s notice to provide this invaluable service.

“Our thanks to the University for their commitment in giving this support to HM Coastguard in keeping the public, including many University students and staff, safe around our coastline.”