Boxer’s driving KO after hitting 130mph on A92 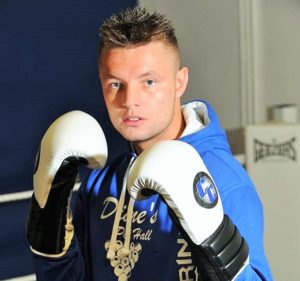 A top Scottish boxer hit speeds of 130mph as chasing police struggled to keep up with him.

When he was finally stopped, John McCallum told officers he was tired after training and just wanted to get home as quickly as possible.

The professional boxer trains in Glenrothes and has a fight for the Celtic super-middleweight title coming up at Meadowbank.

He denied dangerous driving but was on the ropes when the traffic cops gave evidence that he hit 130mph on the A92.

McCallum (28), of Galashiels, appeared for sentencing at Dunfermline Sheriff Court, having been found guilty after a trial there in April.

He was fined £1000 and disqualified from driving for 18 months, backdated to 3rd April when an interim ban was imposed.

McCallum had denied on 10th February last year on the A92 between the Cardenbarns overbridge and Lochgelly overbridge, he drove dangerously, accelerated quickly at excessive speed for the road and road conditions and repeatedly overtook vehicles when it was not safe to do so.

Defence solicitor Peter Mullin said his client’s life had been greatly disrupted by the ban.

“It has put his boxing career in jeopardy but those who work with him are going to do all they can to keep it going,” added Mr Mullin.

At the trial, PC Charles Guthrie, 50, said he was passenger in the police car which spotted McCallum speeding as he drove west in a BMW at around 10.30pm.

He said his attention was attracted because the car was travelling “well in excess of the 70mph limit”.

Driver PC Craig Hall followed the BMW and speeded up so that his vehicle was travelling at the same speed as McCallum, which initially was 95mph.

However, then McCallum accelerated and PC Hall did the same so that the distance between the cars was constant for a period of just under two miles. During this time, both cars were travelling at 130mph, said the officers.

McCallum then slowed down to around 70mph and the police blue lights were activated.

He pulled over to a lay-by. PC Hall said McCallum explained he had been to the gym, was tired and “wanted to get home as soon as possible”. McCallum did not give evidence at his trial.