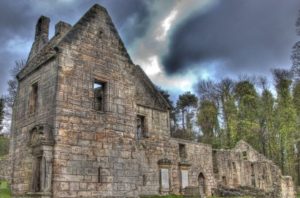 A teenage vandal who caused £5000 damage by spraying graffiti on the walls of a historic Fife landmark has escaped punishment.

The 17-year-old youth from west Fife, who cannot be named for legal reasons, spray-painted the walls of the 12th Century St Bridget’s Kirk in Dalgety Bay.

He appeared in the dock at Dunfermline Sheriff Court for sentencing dressed in his school uniform.

He previously admitted that on 24th March last year he wilfully or recklessly damaged the church at St Colme Road by repeatedly spraying paint on the walls. 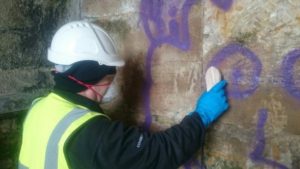 *Restoring the landmark was a long and expensive process

Defence solicitor Sarah Meehan said her client was a sixth-year pupil who was planning to apply for university.

She said he “failed to appreciate” the significance of the building.

Sheriff Craig McSherry said he could impose a fine which the youth could pay back to his parents but added, “From personal experience, I know the chances of that happening would be zero.”

He admonished the youth for the offence.

Extra security patrols had to be deployed last year as part of measures to deter gatherings and prevent any further damage.

There had been a number of reported incidents of people congregating at the medieval ruin and engaging in anti-social behaviour.

Sergeant Kate Blackwell, of Dalgety Bay Police Station, said at the time, “St Bridget’s Kirk is a beautiful local landmark and this vandalism has caused significant and long-lasting damage.”

Richard Aitken, of Historic Environment Scotland, said following the damage, “Mindless vandalism like this is not acceptable and very sad, given the long history and significance of the monument.

“We know that many in the community are just as concerned about the defacement of this important piece of local and national heritage as we are, and we would encourage them to play their part by being extra vigilant in reporting any information they have relating to this type of behaviour.

“We are working with Police Scotland and Fife Council to ensure that this kind of behaviour is prevented from re-occurring, and an important monument protected for future generations.”