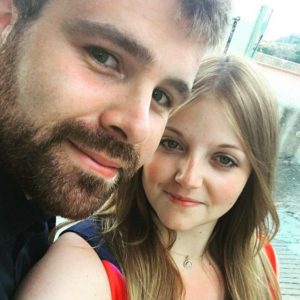 Blair Logan, who murdered his younger brother by setting fire to him has been ordered to spend at least 20 years in jail.

Cameron Logan (23) died in the blaze in Milngavie and his girlfriend Rebecca Williams (25), from Fife, was seriously injured.

Last month, Blair Logan (27), pictured below, admitted murdering his brother and attempting to murder Rebecca at the family home.

He said he doused his brother in petrol and set him alight but did not mean to kill him.

At the High Court in Edinburgh today, he was given a life sentence with a minimum jail term of 20 years before can be considered for parole.

In a letter read to the court, his parents said they found it “extremely difficult to reconcile the Blair that they know with the Blair that caused Cameron’s death”.

Both parents were in court, along with Rebecca and her family, as the sentence was passed by Lady Scott.

She said Cameron had died a “horrible death” and that Logan “acted with wicked recklessness”.

The judge accepted court reports that he had “abnormal personality traits” but said there was no suggestion that Logan had a mental disorder and was fully criminally responsible for his actions.

At an earlier hearing, the High Court in Glasgow heard that the brothers had a “hostile” relationship.

Blair Logan, a supermarket store assistant, told police they had not spoken since the death of their grandmother in 2013.

The attack was said to be in retaliation for a recent incident at the house when his brother had punched him.

On the night of the fire Cameron and Rebecca slept on an inflatable mattress in the living room of the family home, after returning from a party at about 4 am

Catherine Logan, the brothers’ mother, went downstairs at 7.15 am and saw a dark figure in the living room.

She saw him throw something that was on fire and then run out of the house – but she did not know who he was.

The court was told that when she turned back to the living room, she saw “orange and crackling” and the room turning black. Cameron and Rebecca were screaming.

Rebecca, known as Bex, managed to crawl into the kitchen but was unable to open the back door. She put her head in the fridge to protect herself from the fire before passing out.