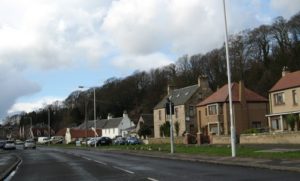 A drunk unqualified driver smashed into vehicles in the main road through a Fife village.

Sarah Watson, who was over the drink-drive limit and had blue foam dripping from her mouth, repeatedly drove on to pavements in the village at lunch-time.

After causing extensive damage to two vehicles, Watson and her then boyfriend left the scene.

Dunfermline Sheriff Court heard that Watson was out on licence having been given early release from a previous jail sentence when she committed these crimes.

Despite the long list of offences, unemployed Watson avoided another jail term when she appeared for sentencing.

Watson (24), of Abel Place, Dunfermline admitted that on 7th July 2016 in Main Street, Newmills, she drove a car carelessly by failing to maintain proper control of it, caused its wheels to spin, repeatedly mounted a kerb and collided with two vehicles damaging them.

She also admitted that as the holder of a provisional licence she drove without being accompanied by a qualified driver and was not displaying ‘L’ plates.

She also admitted driving without insurance and that after being involved in the collisions, which caused severe damage to all the vehicles, she failed to stop and give her name and address.

Watson further admitted driving while being unfit to do so through drink and drugs.

Depute fiscal Joanne Smith said the impact of one of the collisions caused “the wheels of one vehicle to be lifted off the road”.

She added, “A witness followed her and put his car in front of the accused’s vehicle.”

Watson and her passenger got out of the vehicle and walked away as police were called.

Officers arrived and found Watson 300 metres from the collisions. “They saw the accused stumbling in the middle of the road, her speech was slurred, she was unsteady on her feet and there was blue foam dripping from her mouth,” said the depute.

Later, a blood sample could not be taken as a doctor was unable to find a vein. “As a result, we don’t know what was in her system,” added Ms Smith.

Watson failed a breath test and had 52 microgrammes of alcohol in 100 millilitres of breath, more than twice the limit.

Sheriff Charles MacNair told Watson, “The consequences of driving through a village during lunch-time when you are unfit to do so through drink and/or drugs could have been catastrophic.”

He fined Watson £585, placed her on community payback order with 135 hours of unpaid work and disqualified her from driving for 22 months.