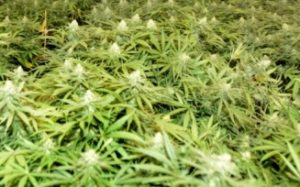 Over 150 cannabis plants with a street value of £50,000 have been seized in a police raid in Kirkcaldy.

Officers executed a warrant at an address in Kennedy Crescent on Tuesday and the cannabis plants as well as £5000 were recovered.

A 29-year-old man and a 20-year-old woman have been charged in connection with this and were due to appear at Kirkcaldy Sheriff Court today.