Bus driver who caused crash was “not familiar” with route 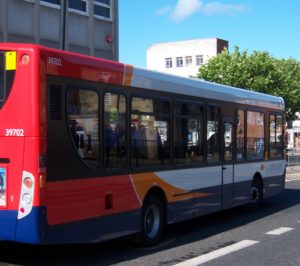 A  Fife service bus driver who caused a collision with a van was “not familiar” with the route.

William Finlay failed to stop at a junction near Dunfermline and lost his job because of his careless driving.

He admitted that on 13th December on the B914 road he drove a Stagecoach single decker bus without due care and attention, failed to give way to other traffic at a give-way sign and caused the bus to collide with a van whereby both vehicles were damaged.

Depute fiscal Carrie Stevens said Finlay was driving a Stagecoach bus on the junction of the A823.

“There were two passengers on the bus. He approached the junction but did not stop at the give way sign,” she added.

“He pulled out into the path of van. The van driver braked but there was a collision with the bus.”

Police arrived at 5.15pm and found the van damaged. Its bonnet was crushed and the windscreen smashed.

Defence solicitor Alexander Flett told the court that the bus was on a B-road at a junction near Knockhill.

“He didn’t stop at the junction. He thought it was clear but unfortunately it wasn’t. He pulled out and the van couldn’t stop.”

The solicitor said his client had initially been suspended following the incident and later was dismissed from his job.

“He’s now given up driving buses and has a new job with a security company. He is very apologetic and has admitted his guilt at an early stage.”