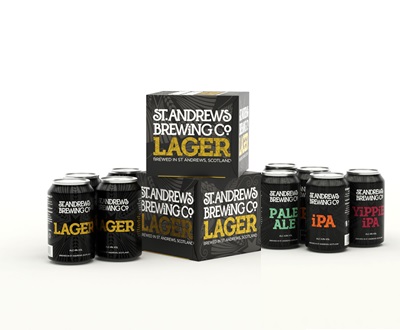 A Fife brewing firm has signed a lucrative deal which will see its beers going on sale in supermarkets across the country.

After their successful crowd fund, St Andrews Brewing Company have recently gone through a period of rapid growth.

They have now secured a deal with Sainsbury’s estimated to be worth £600,000, delivering beer into their Scottish stores.

The brewery will supply Sainsbury’s with its new core range: a 4% Lager, a Session IPA at 3.2%, a 4.5% Pale Ale and their signature beer, Yippie IPA, a 6.0% American-styled IPA.

They will also offer 5 litre mini kegs of the Lager and Session IPA.

The new range of beers go on sale in Sainsbury’s stores on Wednesday 12th June, just in time for Father’s Day.

David McMahon, Sainbury’s Scotland Regional Buyer, added “We’re delighted to be able to work with local brewers, St Andrews Brewing Company to extend their range of craft beers and lagers in our Sainsbury’s stores in Scotland.

“We’ve seen huge growth in this sector over the past year which has been largely driven by local breweries and with the addition of the St Andrews new beers, branding and overall offering, we expect this to continue.”