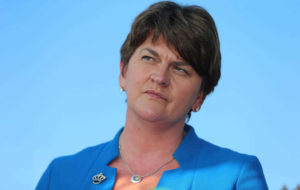 DUP leader Arlene Foster is to attend an Orange Parade in Cowdenbeath this month.

The former First Minister of Northern Ireland is expected to the guest speaker at an event on 30th June.

Her own period as First Minister ended when the Stormont power-sharing executive collapsed eighteen months ago.

Her party has been in the spotlight this week over its opposition to abortion after the vote in the Republic of Ireland to overturn the ban on terminations there.