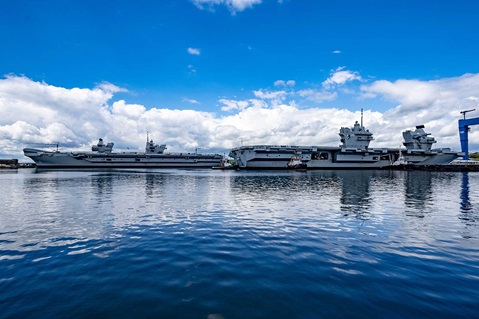 The captain of the Royal Navy’s HMS Queen Elizabeth aircraft carrier has been removed from the ship in a row over his use of a MoD car.

Commodore Nick Cooke-Priest was flown off the £3 billion ship, built at Rosyth, as it was anchored in the Forth.

The Navy said it was a “precautionary measure” in an “ongoing investigation”.

It had previously said Commodore Cooke-Priest would sail from Rosyth to Portsmouth as planned before being moved to new duties.

Commodore Cooke-Priest has been in command of the HMS Queen Elizabeth since October last year.

Last week it was revealed the Navy was investigating reports he had used his Ministry of Defence car – a Ford Galaxy – for his own personal trips.

The carrier had been back at Rosyth for a dry dock inspection which it is said to have passed “with flying colours”.

During her time out of the water, 284 hull valves were changed, both rudder blades were removed and cleaned, her sea inlet pipes were inspected, all sacrificial anodes were replaced, and a renewed coat of anti-foul paint was applied to the ship’s bottom. The huge port and starboard anchors and cables were also laid out along the length of dock to allow them to be inspected.

The docking period was a mandatory requirement and its successful completion means HMS Queen Elizabeth should not need to dock down again for another six years.

Head of Marine Engineering onboard, Cdr Mark Hamilton said, “It’s the first time that such a short docking period has taken place with a Royal Navy ship of this size.

“It’s real testament to the great working relationship forged between the MOD and industry to make this such a success. We’ll now carry the concept forwards to future docking periods, as well as to those of our sister ship HMS Prince of Wales”.