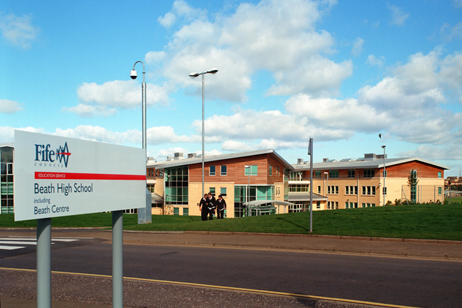 An 18-year-old Fife youth has been sentenced for two “nasty” assaults he committed against pupils when he was at high school.

In one of the attacks, a 13-year-old boy sustained a fractured cheekbone after being punched by Dylan Wakely.

Sheriff Simon Collins said, “These were nasty assaults.”  He imposed a community payback order with 180 hours of unpaid work. Wakely was also told to pay £150 compensation to both victims.

The boy’s mum said tonight, “I’m disgusted by a payback order. An adult hitting bairns is only worth a few hours. He’s a predator and a threat to children.

“My son was injured with a broken cheek bone.  His sinuses filled with blood for six weeks.

“He had to move schools because Fife Council see fit to keep the criminals not the victims. He was unsettled for a few months but he’s much better now.

“He has been through so much pain and keeps smiling. We are proud of our son and the man he’s becoming.”

Five months after the first offence Wakely punched a 14-year-old girl after throwing a snowball at her.

Wakely previously admitted that on 22nd August at Beath High School, Foulford Road, Cowdenbeath, he assaulted a boy who was then aged 13 by punching him on the head to his injury, while acting under provocation.

He also admitted that on 22nd January at Foulford Road, he assaulted a girl then aged 14 by grabbing her hair, pulling her and punching her on the head to her injury.

Depute fiscal Azrah Yousaf previously told the court the the first incident resulted in the victim sustaining a fractured cheekbone.

“The complainer was standing next to the accused and others on the ground floor of the school,“ she went on.

There was an incident where another pupil spat from an upper level and Wakely reacted by punching the 13-year-old boy.

“The boy’s eye was swollen and his nose was bleeding. Teachers came and took over the situation.”

The second incident took place at around 1.30pm, Ms Yousaf told the court.

“There had been recent ill-feeling between the accused and the complainer. On this day she had left school with friends to go to shops and snowballs were thrown by the accused at them. They approached him and he made a pre-emptive strike by punching her on the face, causing her to sustain a swollen cheek.”