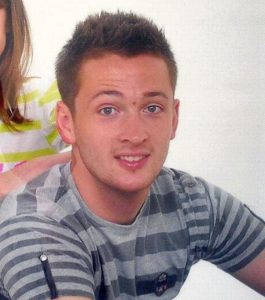 A 16-year-old schoolboy killed young dad Shaun Woodburn by punching him, causing him to fall to ground and striking his head on the pavement, a jury decided today.

Mr Woodburn (30),  a well-known junior footballer, sustained massive head injuries in the fall during a mass brawl outside a Leith bar in the early hours of New Year’s Day.

He was rushed to hospital but died a few hours later.

The youth had been drinking and causing trouble on the streets of the capital as huge crowds celebrated Hogmanay.

Before the bells as crowds gathered at the Meadows to watch the fireworks, the youth punched student Hugh Cullen who had wished him ‘Happy New Year’. The victim sustained multiple fractures to his face.

The youth, now 17 and who cannot be named for legal reasons, was part of a group who continued to attack random strangers.

One of these was Michael Smith who just left Gladstone’s Bar a short time before. When news of this assault reached the pub shortly afterwards it sparked a spiral of violence.

Shaun Woodburn had been in the bar enjoying a party with friends including Danny Swanson, the Hibs footballer, whose dad owns the pub.

As the trouble began in the street, Danny’s cousin Steven Swanson ran back into the pub, grabbed two pool cues and asked others to follow him outside.

His friend Shaun Woodburn was one of those who went outside and as several fights broke out on the cobbled street, he was fatally injured.

CCTV images captured much of the fighting but not the blow which struck Shaun Woodburn.

After a 17-day trial at the High Court in Dunfermline, the youth was found guilty of culpable homicide.

The jury found that that in Great Junction Street on 1st January he assaulted Shaun Woodburn, punched him on the head, causing him to strike his head and killed him.

The youth admitted assaulted five other people in the streets of Edinburgh that night.

He has been in custody since the incident and will be sentenced at the High Court in Glasgow on 8th November.

Mohammed Zakariyah (19), who was with him that night and has admitted two separate assaults and a breach of the peace, will also be sentenced then.

There was a heavy police presence in the courtroom and the officers were required.

Trouble broke out in the public gallery between the friends of the dead man and relatives of the youth.

There were loud shouts of ‘yes’ and ‘thank you’ as the guilty verdict was announced. The youth slumped to the floor in the dock in tears and there was loud wailing from a female relative.

The youth then stopped at the top of the stairs as he was being taken to the cells resulting in loud shouts of ‘Get him down’.

With the judge and jury looking on, police removed people from the public gallery amid shouts and threats.

There was more shouting between the two groups as they left the court building.