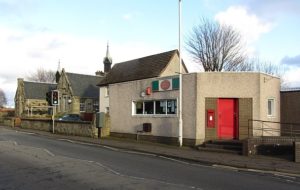 A female post office worker was threatened with a hammer during a raid in Fife.

The incident happened at around 2.15pm yesterday at the post office in Kinglassie Main Street.

A male entered the premises and threatened a female staff member with a hammer before leaving with a four-figure-sum of cash.

The robber is described as a white man with a medium build, around 5ft 7 – 8 inches tall, of medium build. His face was obscured by a scarf.

He was wearing black trousers, boots and a dark coloured, possibly dark brown, hooded top. The hood was worn up over the suspect’s head.

Detective Inspector Stewart Andrew, of Fife CID, said “The staff member was understandably shaken and distressed by this incident. We are currently pursuing a number of lines of inquiry to trace the man responsible.

“Be assured that we will use all resources at our disposal during this investigation, however we do need the public’s assistance.

“We believe the suspect made off on foot, so we would be very interested to speak with anyone who was in the Main Street area of Kinglassie around 2.15pm on Thursday.”