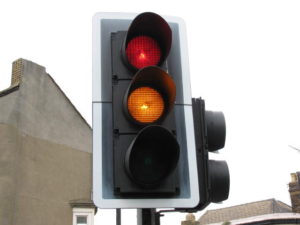 A Fife taxi driver, on a school contract with a pupil in his car, lost control of his vehicle as he looked at his satellite navigation device and smashed into a set of traffic lights demolishing them.

Jon Aitken, distracted by his sat-nav, was seen swerving about the road for some time before the collision.

Fortunately, no-one was seriously injured but the damage to the traffic lights cost £10,000 to repair.

The incident led to Aitken (23), of Cadzow Place, Glenrothes, appearing in the dock at Dunfermline Sheriff Court.

He admitted that on 15th May in Main Street, Lumphinnans, he drove a taxi without due care and attention, failed to keep control of the vehicle, repeatedly veered towards the centre line of the carriageway, collided with a set of traffic lights causing them to collapse, causing damaged to the taxi and the lights.

Depute fiscal Dev Kapadia said the incident occurred at around 7.40am when Aitken was driving a 13-year-old boy to school.

He went on, “A Fife Council employee driving behind his taxi saw it veering towards the centre line of the road. This happened on several occasions before the steering was corrected each time.

“This witness shouted to his passengers three times that the taxi was going to crash before it did collide with the traffic lights which toppled over.”

Defence solicitor Edward Cadden said the accident was caused by a “lack of concentration”.

Sheriff Pino Di Emidio said, “This was a lapse of concentration that went on for some time causing alarm to another driver.”

He fined Aitken £380 and endorsed his licence with six penalty points.