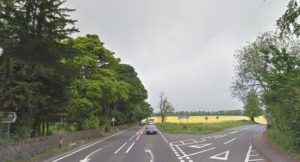 A widow has described the “nightmare” of discovering her husband had been in killed in a horrific collision with a van, near Limekilns.

Janetta Sinclair was a pillion passenger on the back of her husband Alexander’s motorbike when the fatal accident occurred as they travelled for a day out in Burntisland.

The collision occurred on a fine summer’s morning and was captured on video by a cyclist who had cameras fitted on their bike.

The van driver Charles Spence has gone on trial at Dunfermline Sheriff Court, accused of causing the death of 66-year-old Mr Sinclair through careless driving on 11th June 2015 on the A985 Rosyth to Kincardine at its junction with the B9156 Dunfermline road.

It is alleged that Spence caused the death of Alexander Sinclair by driving a van without due care and attention or without reasonable consideration for other road users by failing to keep a proper look-out, failing to observe a motor-cycle, driving his van on to the A985, causing Mr Sinclair to take evasive action and as a result collided with the van causing his death and causing Janetta Sinclair to sustain injuries.

Mrs Sinclair (66), from Grangemouth, told the court they were travelling on her husband’s bike for a day out, as she had done since she was in her early 20s.

“I was just looking at scenery and trees at the side of the road. I felt my husband braking hard and then braking again. I thought, ‘This is going to be bad’.

“I couldn’t get up because it turned out that the top of my left leg was fractured.”

Mrs Sinclair said she was passing out through loss of blood but recalled being told an air ambulance was coming for her and then seeing the blades of the helicopter.

She told the court how she discovered her husband had not survived the crash.
“I was taken to hospital in Edinburgh and was being taken down a corridor. I said, ‘Where’s my husband?’ I was expecting them to say he was in a ward but they said he was dead.

“I thought it was a nightmare. I shut my eyes to go to sleep but when I woke up I thought I was still in the nightmare.

“That’s all I kept thinking, ‘This is a nightmare’.”

David Cox (51), from Dunfermline, was driving home from High Valleyfield, when he was overtaken by Mr Sinclair just before the accident.

The witness told the court he was very impressed by the way Mr Sinclair handled the bike, saying, “He looked very careful to me.”

Moments later, Mr Cox came across the crash scene which he described as “carnage”.

The court was shown the video taken from the front and rear of a passing bike. It showed Mr Sinclair riding along the centre of the east-bound carriageway of the A985, the van appearing to move out and then a collision occurring.

The sheriff and jury trial continues.