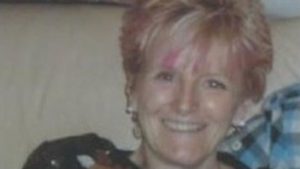 A van driver, who caused the death of a Fife gran in a horrific crash near Leuchars, has been jailed for four years.

Andrew Reilly (29), from Dundee, made no attempt to avert the head-on collision with a car in which 58-year-old Audrey Thom, from Balmullo, was a passenger.

Mrs Thom (pictured above) was a mother of three and had just become a grandmother for the first time.

Mrs Thom’s daughter Louise could not avoid Reilly’s van, heading directly at her on her side of the road.

The crash occurred on the A914 Balmullo to Dairsie roundabout road in November 2015.

Appearing for sentence at the High Court in Edinburgh, Reilly was also banned from driving for eight years and ordered to re-sit a driving test.

He had previously admitting a charge of causing death of Mrs Thom by dangerous driving.

Judge Michael O’Grady QC told Reilly that the court had “emphasised time and time again” that driving in the manner that he did was “so obviously dangerous and foolhardy and irresponsible”.

He said, “It has time and again warned young men of the consequences for others and indeed them, and yet I sometimes despair that that message will ever be heeded.

“There is no escaping the gravity of what you have done and the dreadful consequences which flow from it.

“When all is said and done, a woman has lost her life, has been taken from her family and there is no diminishing the emptiness and grief of that.”

The court heard that the plumbing and heating engineer had previous convictions for driving without insurance and speeding.

Police investigators concluded that Reilly had made a decision to carry out a late overtaking manoeuvre as he approached solid white lines on the road.

He then drove on to the opposite side of the road.

In a statement released after her death Mrs Thom’s family said, “Audrey was a much loved wife, mother to three daughters and very recent granny.

“She will be sadly missed.”