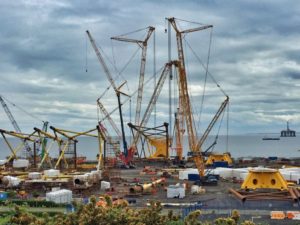 New fears have been raised tonight over the future of the BiFab marine engineering yards in Fife and Lewis.

Union representatives have said the yards in Burntisland, Methil and Arnish are again in danger of closure.

They have been told by managers that redundancy notices will be given to the core workforce tomorrow.

The Unite union said it expects about 260 jobs to go, with redundancies beginning in May.

The union said it has been told the decision will only be reversed if new contracts for work are signed.

Unite regional officer Bob McGregor said, “The workers there have fought for their future and it is difficult to believe that it can now be snatched away from them.

“The closures of these yards will turn these areas into an industrial graveyard. The prospect fills us with dismay.”

He went on, “We can’t say this is a total shock because work at the yard has been running down for weeks now.

“However all the interested parties, the company, the contractors, the unions and the Scottish government, given what has been done so far, must surely look to have an eleventh hour intervention which can do something to save these jobs.”