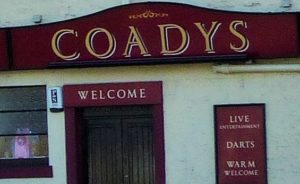 A Teesside man, who assaulted two customers with a glass in a Dunfermline pub, has avoided a jail sentence.

Dean Oxley was chased from the pub by irate regulars and jumped into a police car to escape from them.

Oxley (31) had been working in Fife and went out drinking for the day to watch a football match.

However, violence erupted when he glassed a man after sitting on his stool. As Oxley tried to escape from the pub he was confronted by another customer and punched him in the face with what was left of the beer glass.

At Dunfermline Sheriff Court, Oxley admitted that on 19th March at Coady’s, Pilmuir Street, he assaulted a man by striking him on the face with a glass to his injury.

He then assaulted a second man by punching him on the face whilst holding a glass.

Depute fiscal Claire Bremner said the incident occurred when Oxley went into the bar at around 10.30pm, ordered a drink and sat down.

A customer returned from the toilets and told Oxley he was sitting in his seat.

“The accused immediately struck him on the face with a glass and struck him with such force that the glass shattered.”

As Oxley tried to leave he was confronted by another man and punched him in the face, still holding what was left of the glass.

“The accused then ran from the locus pursued by a number of people. He ran to a stationary police vehicle and got in it. The vehicle was then surrounded by those pursuing him.”

The depute said the first man was injured but refused hospital treatment and the second man was not injured.

Defence solicitor Gordon Martin said his client was working at Rosyth Dockyard at the time of this incident.

His client’s position was that the comment about the seat had been made aggressively but he admitted he “over-reacted” to this.

His client had gone out to watch his football team Middlesborough on TV and was drinking throughout the day.

He said his client’s tee-shirt had been ripped off in a struggle, a bar stool was thrown at him and he had to “seek refuge” in a police car as he was chased from the pub.

Sheriff Craig McSherry received a letter from Oxley and a “voluminous” number of character references from people who know him in Teesside.

The sheriff said he took account of these and the time spent on remand since the offence when deciding “with some considerable reluctance” to only impose a financial penalty. He fined Oxley £900.