The Meaning of Fife 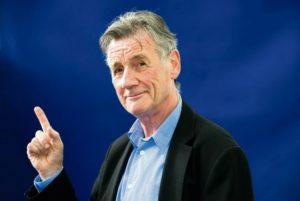 Comedian, broadcaster and writer Michael Palin is to be awarded an honorary degree by the University of St Andrews next month.

The ex-Python will be joined by figures from the worlds of science, literature, religion, film and broadcasting during the University’s summer graduation ceremonies.

Mr Palin – who will receive his degree on Friday 23rd June – is the third Python to be honoured by the University of St Andrews.

They are among twelve distinguished individuals to be honoured between 20 and 23 June at the Younger Hall.

The full list of recipients this summer is as follows:

Professor Michael Klein – Laura H Carnell professor of science at Temple University in Philadelphia, USA, and the director of the Temple Institute for Computational Molecular Science.

The Rt Hon Dame Elish Angiolini – Scottish lawyer and former Lord Advocate of Scotland (2006 until 2011) whose work resulted in the establishment of the National Sexual Crimes Unit.

Mr Donald Macleod – writer and broadcaster for the BBC radio and news.

Mr David Nott – consultant surgeon and authority in laparoscopic surgery, and the first surgeon to combine laparoscopic and vascular surgery.

Professor Malcolm Longair – physicist, served as the Jacksonian Professor of Natural Philosophy in the Cavendish Laboratory at the University of Cambridge from 1991 to 2008.