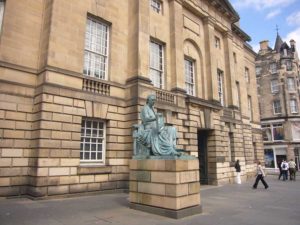 A pregnant woman lost her unborn twins after being repeatedly stabbed in an attempted murder in Fife.

The victim was also repeatedly punched and throttled by Stephen Ramsay during the attack.

Ramsay (36) stabbed his victim with a knife, resulting in her losing her 32-week-old unborn babies, in February.

Police kicked the door in at the flat the couple shared at Delgatie Court, Glenrothes, where they found Ramsay straddling the victim with his hands around her neck.

She was covered in blood and was almost unrecognisable because of bruising and swelling to her face.

At the High Court in Edinburgh, Ramsay admitted attempted murder.

Advocate depute Derick Nelson said, “The officers observed the complainer was heavily pregnant and appeared to have had her throat cut, with blood spurting every time she tried to breathe.”

Officers tried to stem the flow of blood from the wounded woman with clothing as they awaited paramedics but feared she was going to die in their arms.

When Ramsay was later told the unborn babies had died he became inconsolable and shouted: “I’ve murdered my kids. I don’t deserve to be treated. I deserve to die, just kill me now.”

The woman was taken to Victoria Hospital.

Mr Nelson went on, “It was reported the complainer was unconscious and had two episodes of cardiac arrest with CPR provided by the police and ambulance staff.”

The victim suffered a spinal cord injury because of the stab wound to her neck and respiratory arrest, along with extensive bruising and at least 22 separate injuries on her torso alone.

She suffered brain damage and was left with balance problems in the wake of the attack.

The victim was initially put into a medically induced coma before the unborn children died following a collapse in the woman’s circulation as a result of which they were deprived of sufficient blood supply.

Mr Nelson said, “The twins did not survive for longer than a couple of minutes after the circulatory collapse.”

Ramsay, who has extensive previous convictions including assault, theft and fraud, was under the influence of drink, prescription medication and illegal drugs at the time of the attempted murder.

The court was told that the twins were going to be named Edith and Ajay.

Sentencing has been deferred until September 27th at the High Court in Glasgow.