Perv carried out hot tub repairs with his penis hanging out 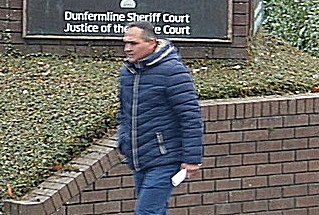 A hot tub repair man turned up a female customer’s front door with his penis sticking out of his trousers.

Ivan Kotkov remained in that exposed state as he carried out work at her house in Fife.

Perv Kotkov then went to the home of another woman he again walked around the house with his penis out.

Bulgarian national Kotkov, who has lived in the UK for over two years, has now been placed on the sex offenders register.

He had been employed by a Welsh firm and travelled up to carry out repairs to hot tubs at homes in Dunfermline and Cowdenbeath on the same day.

Kotkov (42), of Marine Parade, Barmouth, was found guilty after a trial at Dunfermline Sheriff Court.

One of the women took a photograph of the penis hanging out of his trousers and it was shown in court.

On 28th August last year at a house in Dunfermline, Kotkov intentionally exposed his genitals in a sexual manner to a woman and exposed his penis through his open trouser zip.

He also committed the same offence to another customer, a woman in her home in Cowdenbeath, on the same day.

The women, aged 54 and 33, described his penis as “hanging out” and “popping out” of his trousers as he walked about their homes carrying out the repairs.

Both were very distressed by their ordeals with one saying she felt “traumatised” afterwards.

Kotkov claimed the zip on his works trousers was broken but he had not realised this when he turned up at the first house.

He said it was only when he went to use the toilet at that house that he noticed the zip was broken and he had then tried to fix it with a pair of pliers.

He claimed he was not wearing underwear and that the women must have seen his penis through the broken zip.

Kotkov’s solicitor Elaine Buist asked him, “These two ladies were really quite distressed having seen something through your trousers.

“Were you aware at the time somebody would be able to see something.”

Speaking through a translator, Kotkov replied, “I wouldn’t expect anyone to notice a problem.”

“But they did. How did you feel about that?” asked the solicitor.

However, Kotkov accused the ladies of lying about his penis sticking out of his trousers.

Depute fiscal Dev Kapadia asked, “When you put on the trousers that morning you would have noticed the zip was broken, wouldn’t you?”

“It wasn’t broken when I was dressing,” said Kotkov.

“So how do you explain the first lady seeing you at her front door with your penis protruding from your trousers?” asked the depute.

“I can’t say anything about it. I don’t have an explanation,” said Kotkov.

“She said it was ‘popping out’ when you arrived at the door and still protruding when you came out of the toilet. You continued to work on the hot tub with your penis hanging out of your trousers until her father-in-law arrived. She said when you left, your penis was no longer exposed and your zip was up.”

The second woman said that Kotkov went to use her toilet and when he emerged, his penis was hanging out of his trousers.

The woman took a photograph as evidence and she said it appeared he was wearing underwear but had placed his penis outside his trousers.

The women were both alone in their homes and did not confront Kotkov at the time.

The second woman contacted the company once Kotkov had left. The firm then phoned the first customer to asked if there had been any problems there and found out there had been.

The company contacted Kotkov telling him to return to Wales and he went to a meeting with his bosses the next day wearing trousers with a broken zip.

John Owen, 25, works for his family business Tubs 2 You, who had employed Kotkov.

He told the court the firm had received two customer complaints about Kotkov “walking around with his penis out of his trousers”.

He added, “We were concerned as it could have affected business. He’s the face of our company when he’s working for us.”

Sheriff Alastair Brown said, “The evidence of the women was that while he was working on hot tubs the accused had his penis protruding through his trousers. I believe them.

“It was for an extended period in both cases. The obvious inference would be it was for sexual gratification.

“I find his position incomprehensible. It makes no sense for a man who is aware of this problem to have done nothing about it.”

He rejected Kotkov’s evidence “in its entirety on matters of importance” and found him guilty of both charges.

The sheriff called for reports and Kotkov will be sentenced on 4th December. Kotkov has been placed on the sex offenders register.