Patient jailed for punching, kicking, biting and spitting at nurses at Fife hospital 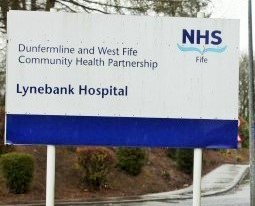 A hospital patient attacked nurses in two violent rampages at a Fife hospital.

He was described as “elated and excitable”, making comments about aliens and the sexual activity of hospital staff before one of the incidents.

He repeatedly bit one woman, punched another while another staff nurse was seized by the neck, kicked and had a piece of glass pushed against her.

The police were called and Fisher was put in handcuffs, leg restraints and a spit-hood.

Fisher, appeared from custody, having been jailed earlier this month for two years for similar violence at a clinic in Ayr.

Fisher admitted that on 7th April 2017 at Lynebank Hospital, Halbeath Road, Dunfermline, a staff nurse by punching her on the head.

He assaulted another staff nurse by attempting to bite her.

He assaulted a third staff nurse by seizing her neck, kicking her and pressing a piece of glass on her body.

He also admitted offences that took place on 10th June 2017, at Lynebank Hospital.

He assaulted a female support worker by kicking her.

He assaulted a staff nurse by repeatedly biting and pushing her.

He assaulted another staff nurse by pushing her and repeatedly spat on her head.

He assaulted another woman by spitting on her.

Defence solicitor Alan Davie said his client was taken into hospital because it was thought he had a learning difficulty but it turned out to be a condition known as Emotionally Unstable Personality Disorder.