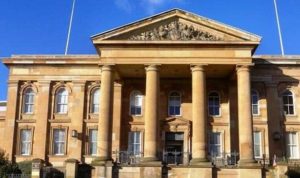 A driving instructor has been jailed for four years for sexually assaulting 14 female learners when they were in his car in Fife.

Last month at Dundee Sheriff Court he was found guilty of 14 charges and he has now been jailed.

Two of the girls told how over the course of a series of lessons Addison had started out touching them on the knee – before gripping the tops of their thighs after becoming more “comfortable”.

Addison later “escalated” to groping several of the girls’ breasts.

His final victim – 17 at the time – told how she fled his car in tears after Addison first groped between her thighs before lunging over and grabbing her breast while she drove around roads in Fife.

She and her sister – also a victim of Addison – went to police that night, setting the ball rolling on the investigation that uncovered many more victims.

The following day Addison was interviewed by police where he said he was,“Stupid, stupid – 18-year-old head on an older body.”

Depute fiscal Eilidh Robertson said, “He feels it is appropriate to shove his hand down the top of a 17-year-old girl in the middle of a driving lesson because he is attracted to her.”

He said, “You chose your victims carefully. The 14 young women who gave evidence were aged between 17 and 21.

“Like most young people, they were eager to learn to drive and wanted to pass their driving test as soon as possible. They looked to you to guide them and help them to achieve their ambition. They paid you good money to do so.

“You took advantage of each and every one of them. You assaulted them when they were in a vulnerable position, alone with you in your car. The assaults often took place whilst they were carrying out difficult and dangerous manoeuvres for learner drivers.

“The evidence would suggest that you were grooming the young women concerned. Each of them referred to the fact that for the first few lessons you were very pleasant and friendly towards them and you gained their trust and confidence.

“It is noteworthy that over time your assaults on some of your pupils escalated and your sexual offending behaviour became more serious. The evidence of the last two complainers who gave evidence demonstrated that.

“The jury heard from your last victim that you had placed your hand on her private parts, over her clothing and told her that she was a pretty girl. You placed your hand under her top and touched her breast.

“She said that you were aggressive towards her. When you saw her crying you told her not to say anything as it would affect your career. She had previously made it clear to you that she did not want you to touch her.

“After the incident she was distressed. Thankfully she saw fit to report your conduct to the police and the matter was investigated in full.

“Police officers carried out at a detailed investigation into your conduct. As a result your known offending, to date, has been brought to a halt before it escalated even further.

“The court must take a serious view of the accumulated effect of your offending. This took place between June 2014 and up to 28 August 2017 when you were reported to the police about this matter. As time passed your offending became more and more serious.

“You are guilty of a gross breach of trust placed in you by each of your victims.

“You breached the trust of the parents who recommended your services to their children. They were happy to leave their children’s safety in your care and actually encouraged them to continue to take lessons from you even though the children had expressed reservations about your conduct.

“Your colleagues must be dismayed by your conduct towards young female pupils and will obviously be of the view that this type of behaviour is totally unacceptable.

“You show no remorse for your conduct and do not acknowledge the harm you have caused your victims. In fact you told the police in your police interview that you were attracted to them.

“You knew they were in a vulnerable position, often trapped in a moving vehicle or in an isolated location. You took advantage of that and left them distressed by your actions.

“I take into account your culpability in planning these assaults; grooming your victims and breaching the trust various people have placed in you as I previously outlined. All of this is aggravated by your persistent offending and the number of your victims over a prolonged period of time.