Pensioner badly injured after falling out of Fife taxi 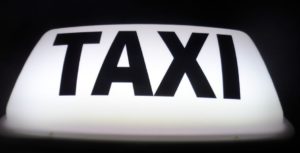 A 74-year-old man sustained serious injuries after falling out of a taxi and being run over by it near Inverkeithing railway station.

The cabbie failed to make sure all the doors were closed before driving off leading to the passenger falling out and trapping his leg under the back wheel.

The pensioner sustained a serious cut to his leg which required a skin graft and was in hospital for a month.

He admitted that on 13th August last year on the road next to Inverkeithing rail station near the junction with Boreland Road, he drove his car carelessly, failed to keep a proper look out, travelled when it was not safe to do so, with the rear door open as a passenger attempted to enter.

Three passengers were being picked up by Slater near the station. A female passenger entered the front passenger seat as Victor Thomson was taking a seat in the back.

Slater drove the taxi away before the door was closed causing Mr Thomson to fall back and out of the vehicle.

“His leg became trapped under a wheel and he screamed,” added the depute.

The female passenger and Slater got out and found Mr Thomson with his leg still trapped under the wheel.

Slater called an ambulance and when paramedics found the man still trapped and asked for the car to be moved.

“There was a large laceration to his leg and there was a lot of blood,” Mr Wilson continued.

The injured man was rushed to the Victoria Hospital in Kirkcaldy and later transferred to Ninewells Hospital in Dundee.

Mr Thomson had sustained a deep cut which went almost completely around his leg. He required extensive treatment including a skin graft and remained in hospital until 12th September.

Slater later told police, “At the time it was so quick. I’d helped the old woman in the front door.

“I heard the back door close. I thought everybody was in so I just pulled away and the old man shouted he’d fallen.

“I got out and saw his leg was bleeding badly. I phoned an ambulance.”

Defence solicitor Jonathan Mathieson-Dear said his client had been a taxi driver for 27 years but was now unemployed having had his licence revoked.

The passengers were elderly and his client had moved from the taxi rank to pick them up.

“The woman’s son had approached him and asked Mr Slater to travel up the road to where they were standing,” added the solicitor.

“He foolishly agreed to move up the road rather than wait for them to go to the rank but did this with the best of intentions.

“It’s a bad corner and taxi drivers are discouraged from stopping there.

“He now accepts he didn’t hear both doors closing and did not see the complainer was not in the taxi.

“He was keen to get on with his journey given where he was parked.

“The process of driving off and running over his leg happened in seconds. He sent the complainer a card wishing him a speedy recovery. He feels a sense of shame and regret for his actions.”

Sheriff Alison McKay told Slater he had shown a “blatant disregard for your passenger”.

She banned him from driving for nine months and fined him £600.