Kinross-trained One For Arthur wins the Grand National 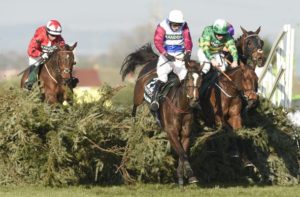 Kinross-trained One For Arthur gave Scotland only its second ever win in the Grand National at Aintree today.

The eight-year-old trained by Lucinda Russell was ridden home by Derek Fox at 14-1 to beat Cause Of Causes into second.

Lucinda became only the fourth female trainer to win the world’s most famous steeplechase.

The only other Scottish-trained horse to win the Grand National was Rubstic in 1979.

Lucinda said, “I am so proud of the horse. He jumped fantastically and I thought Derek gave him a great ride. He has done us proud, he has done Scotland proud and he has done everyone at the yard proud.

“I always say that it’s fine, I am the figurehead and I am saying what is going on, but actually it is everyone back home who have done so much, from the farrier to our vet. We have got a fantastic team behind us and it is great — long may it continue,” said Lucinda, who also credited her partner Peter Scudamore for the success.

“Peter is wearing his dad’s tie, so that has brought us some luck. I am delighted for the team and, without him, I couldn’t do it.”

The winning jockey, in his first ride in the famous race, had only returned to racing earlier in the week following an injury.

Describing the feeling of crossing the line in front, he said: “It’s a dream come true.”

Lucinda has been the premier National Hunt trainer in Scotland since 2009/10 training over 500 winners. In 2013/14 the yard sent out more winners in a season than any other Scottish National Hunt yard.

Her partner Peter Scudamore was eight times champion jockey riding 1678 winners in a record breaking career and he received an MBE for his services to horse racing.