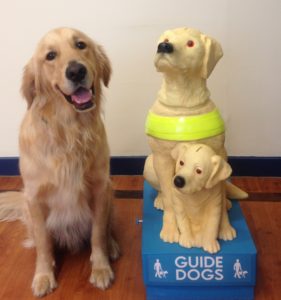 A drug addict stole a charity box from a hospital containing donations of up to £3000 for the Guide Dogs for the Blind charity.

James Henderson had been spotted lurking about suspiciously before walking out of the hospital carrying the metre-wide box.

A disgusted sheriff branded the theft as “foul” as he jailed Henderson for eight months.

Henderson (39), of Golfdrum Street, Dunfermline, admitted that on 5th June at the Queen Margaret Hospital, Whitefield Road, Dunfermline, he stole a charity box and its contents.

Depute fiscal Azrah Yousaf told Dunfermline Sheriff Court the charity box was almost full when it was stolen and it was estimated it would have contained up to £3000 in donations.

“At around 7.40pm one of the hospital security guards became aware of the accused in the minor injuries unit. He was concerned about his demeanour and asked a colleague to keep an eye on him,” said the depute.

“At 8.45pm a person driving in Whitefield Road saw the accused with the box.”

Henderson was apprehended following a public appeal to find the culprit.

He told police, “I was going to try to take it back to James Bank Hostel but thought that might be a bit dodgy so I burst it open.”

He admitted to officers the charity box was “full to the gunnels”.

Henderson, unemployed, claimed he had used the money to pay off drugs debts and kept £50 for himself.

Defence solicitor Lynsay Magro said her client had been addicted to heroin for 20 years.

“He is no stranger to the court,” she admitted. “He got himself into drugs debt and took the decision to commit this offence to pay off that debt.”

Jailing Henderson, Sheriff Craig McSherry told him, “This was a foul offence, the theft of a charity box.”