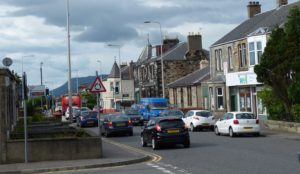 A “rude” female bank customer became the target of a revenge allegation of robbery.

Simon More was speaking to a bank teller when the woman told him to hurry up and get served as she waited in the queue behind him.

He was so offended that he later made up a bogus story that the woman had robbed him as he left the bank with his money.

That evening the bemused woman was hauled down to the police station for a grilling.

However, when CCTV from the bank was viewed it showed that no crime had taken place.

As a result, it was 39-year-old More, of Taylor Avenue, Cowdenbeath, who was in the dock at Dunfermline Sheriff Court.

He admitted that on 29th September at Bank Street, Lochgelly, he falsely told police he had been the victim of a robbery, wasted police time depriving the public of officers’ services and placing innocent people under suspicion and accusation of robbery.

Depute fiscal Claire Bremner told the court that More had attended the Bank of Scotland as a customer on the day of the incident.

“He was chatting to the bank teller when another customer told him to hurry up. The accused took offence to this and left.

“He returned to the bank after 20 minutes and told a member of staff he’d been robbed,” said the depute.

“Police were contacted and he said he’d been robbed in the doorway of the bank. He provided the names of two individuals. One of them was the person who had told him to hurry up.

“They were both detained at around 6.15pm and taken to Dunfermline police station.

“Police carried out CCTV inquiries which revealed no robbery had taken place.”

Police then arrested More and he admitted he had made the whole thing up because “he didn’t like the way he’d been treated”, added the depute.

Defence solicitor Ian Beatson said, “When he was in the bank another customer was rude to him and he accepts he made up this false allegation against her. He is very remorseful.”

The solicitor added his client was a first offender.

Sheriff Craig McSherry deferred sentence on More until 25th October for him to be of good behaviour.