A Fife chip shop was today named the best in Scotland.

It is the second time Cromars chippy in St Andrews has won the Scottish title, having also taken the prestigious award last year.

The Union Street business, which opened just four years ago, will now go into the UK final in January.

The UK’s top 10 fish and chip shops were revealed today as part of the 30th anniversary National Fish & Chip Awards, organised by Seafish.

Marcus Coleman, Chief Executive at Seafish, said, “By the time the awards ceremony comes around, our finalists have gone through a comprehensive seven-month judging process. 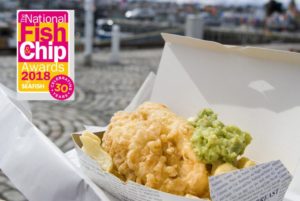 “Having watched our 10 finalists progress through the competition, I can safely say that their skill and dedication is outstanding – they are a true representation of the crème de la crème of our industry and sum up perfectly why British fish and chips are, and will always be, the best in the world.

“I look forward to welcoming them all to the final awards ceremony and crowning 2018’s best fish and chip takeaway in the UK.”