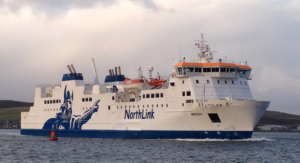 Three Dunfermline men have been jailed for a “feckless” attempt to smuggle drugs into Shetland.

Their behaviour on the ferry brought attention to themselves as they tried to take £5000 worth of cannabis resin into Lerwick without any attempt to conceal the drugs.

They all admitted being concerned in the supply of the drug.

Foy and Howe received six-month prison terms while Purvis was jailed for eight months because he had hatched the plan, sourced the drugs and financed the deal.

Procurator fiscal Duncan MacKenzie previously told the court that the men were “feckless” for carrying bags containing 1932 grammes of cannabis – worth between £2,000 and £5,000 – with “no attempt to conceal” what they were doing.

He added, “It has to be said that it did not require much detective work by the police to establish what they were up to.”

Mr MacKenzie told the court that the men came up with an idea to make money by sourcing cannabis in Fife and selling it in Shetland “as a one-off” endeavour.

He said Purvis, who was already working in the isles, transferred money to Foy and then Foy and Howe travelled north on the ferry, with Howe in possession of the drugs.

They were discovered at the ferry terminal in Lerwick.