Fife student in nude pics blackmail: “I was just teaching her a lesson” 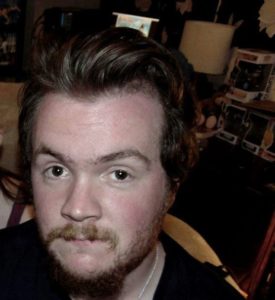 A sleazy creep, who tried to force a fellow Fife College student to send him nude photos, has claimed he was just trying to teach her lesson about cyber-security.

David Drynan (pictured) used a college computer where a female student had earlier failed to log out and he went into her Facebook account to view private images.

She had sent pictures of her in her underwear to her boyfriend and Drynan tried to use these to blackmail his victim into sending him nude photos.

He threatened to post the private photos on-line and, when she failed to respond, he did just that.

Drynan, from Kirkcaldy, was booted off his computer course at Fife College when his actions came light and has now appeared in court for sentencing.

However, despite accepting his own guilt, Drynan also tried to put blame on the girl for failing to log off saying he was shocked by this.

He claimed he was trying to help her by teaching her a lesson.

He told the court, “Cyber security’s very important to me. I made the mistake of trying to scare a lesson into her.

“I wanted to show her the worst case scenario and took on that role. My intention was not to get more pictures. I didn’t think anybody in their right mind would send more photos.

However, his spineless claims were dismissed by a sheriff.

Depute fiscal Alex Kirk asked Drynan, “Who made you the internet police? You just wanted to see this pretty girl naked.”

Drynan denied this and told the court he only realised he had done anything wrong when he was arrested.

Drynan (29), of Rosabelle Street, Kirkcaldy, previously admitted that on 7th June last year at Fife College, St Brycedale Avenue, Kirkcaldy, he behaved in a threatening or abusive manner by making threats to a woman that unless she sent him intimate images of herself, he would post other images of her on the internet and send them to her employer.

He also admitted that on 8th June he posted images of the woman on the internet intending to cause her fear, alarm or distress.

A proof hearing was required as Drynan claimed his crime was not sexually motivated.

The court previously heard that he had created a fake profile and began making threats to post the photos to the public if she did not send him naked images.

When she refused to do, Drynan went ahead and posted the photos which had originally been sent in a private message to her boyfriend.

The victim and Drynan were both students at the college at the time but did not know each other.

Later that day, Drynan used the same device and found it was still logged into the victim’s Facebook page.

The woman then began receiving messages from Drynan who was using a false profile, ‘John Smith Tee Hee Hee’.

He sent her an initial message saying “Looking good girl” and “send more boob pics”. If she did not, he would post the images he had already found, he warned.

The victim was able to track down the I.P. address to Fife College and investigations began.

The following day more messages were received from the fake profile including, “Six and a half hours to go. Better get those boob pics sent.” He also stated it would be a “shame” if the images were sent to her employers.

Another message said, “Last chance”. When he did not receive the photos he demanded, Drynan went ahead and posted the original images on-line.

When police inquiries led to his arrest, Drynan commented, “I have no words” and said he did not know anyone of the victim’s name. Sheriff MacNair rejected Drynan’s cyber-security story and put him on the sex offenders’ register.

He also imposed a community payback order with two years’ supervision and 225 hours of unpaid work. The sheriff told Drynan it was only the fact that he was a first offender that had kept him out of jail.