Fife sex “monster” behind bars after years of rapes and abuse 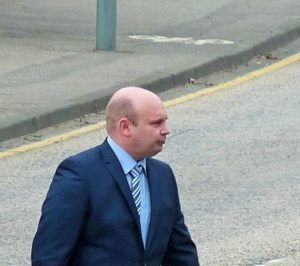 A Fife serial rapist described by one of his victims as “a complete monster” is finally behind bars.

Neil Ireland is the father of two children conceived through rapes, the High Court in Dunfermline heard. He also raped the same woman twice when her child was in the bed beside her and on one of these occasions she was eight months pregnant.

He claimed in court another victim had a fantasy of being raped and he only took part in this “reluctantly”.

Ireland (39) was today found guilty of a series of rapes and sexual offences against four women over a period of almost eight years.

The offences took place in Cupar, Methil and Leven between January 2008 and December 2015.

The judge described it as “a particularly unpleasant and distasteful case”. 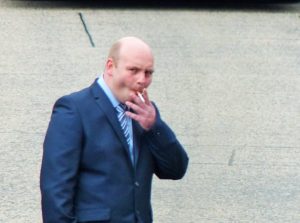 *Ireland outside court in Dunfermline before the guilty verdicts

During a two-week trial, the victims were forced to re-live their ordeals at the hand of Ireland, of Taylor Street, Methil, but latterly living with his mother in Glenrothes.

It emerged Ireland preyed on vulnerable women when they were going difficult times.

One woman said she had a drink and drugs problem after coming out of a violent relationship. Ireland was someone she knew from her local pub and he began taking alcohol to her home and giving her money to buy drugs.

She said she had regarded Ireland as a friend but repeatedly told him she did not want to have a physical relationship with him.

The woman told the court that she had passed out on her sofa after a drinking session and woke up to find Ireland raping her.

She said, “I thought he was my friend, he turned out to be a complete monster.” She also described Ireland as “a disgusting person.”

However, in his evidence Ireland claimed this woman wanted to be raped.

His solicitor asked him, “Did you on any occasion rape her?”

“Only by her wanting it. That was a fantasy of hers,” answered Ireland.

He threatened another victim that if she did not have sex with him he would tell police she had breached her bail conditions and she would end up in jail.

On 30th January 2008 in Cupar, he indecently assaulted a woman.

On various occasions between 1st January and 30th June 2008 at another address in Cupar he sexually assaulted a second woman including two rapes. On one of the occasions the woman was under the influence of drugs and incapable of giving consent.

Between 11th April and 1st May 2013, he raped his third victim on three occasions at an address in Cupar.

Then between 2nd July 2013 and 22nd December 2015 he raped the same woman on three further occasions at three addresses in Methil and Leven.

On two of these occasions the woman was pregnant and on two occasions her baby daughter was in bed beside her.

On various occasions between September and December 2015 he sexually assaulted a fourth woman by touching her breasts and buttocks.

On an occasion in December 2015 he sexually assaulted the same woman by entering her bedroom, getting on her bed and trying to pull down her trousers.

Lord Uist told Ireland, “You have been convicted by the jury of a series of very grave sexual offences. In light of these convictions you must expect a very lengthy period of imprisonment.”

Thanking the jury for their service, the judge said, “This has been a particularly unpleasant and distasteful case”.

Ireland will be sentenced at the High Court in Edinburgh on 17th May.