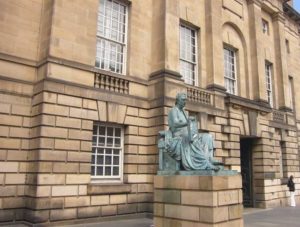 Reigh Braidwood (19), from Dunfermline, carried out a “disgraceful catalogue of offences” against children.

Braidwood, who raped the schoolgirl after she had been drinking, was found guilty at the High Court in Edinburgh.

Jurors were then told that he earlier admitted other sexual offences.

Two were committing sex acts with underage girls aged 14 and 15, one of which occurred on the same night as the rape.

The court heard that Braidwood used the user name ‘Jimmy Savile’ on a Facebook account, used to send a friend request to one of the girls.

The judge, Lord Pentland, told Braidwood, “You stand convicted of a truly disgraceful catalogue of offences extending, by the jury’s verdict, to the rape of a child.

“The evidence satisfies me that you have a deplorable attitude towards members of the opposite sex.

“In my considered view you present a substantial danger to public safety, particularly towards women and young girls.”

The rape victim told the court that in September 2017, while a schoolgirl, she had arranged to go to Rosyth for a drink.

She said that after drinking cider that night, “My vision was blurring. I could hardly stand.”

She remembered Braidwood having some sexual contact at the grounds of a primary school with her and said, “I didn’t know what was going on and when I did, I told him to stop.”

She said she did not want to have intercourse with Braidwood and added, “I remember him being on top and I was sore and I was telling him I was sore but he wasn’t listening to me.”

Braidwood was found guilty of raping the girl on 16th September 2017 during an assault at St John’s Primary School, Heath Road and at Hillwood Terrace in Rosyth, while she was intoxicated and incapable of giving or withholding consent.

He previously admitted having sex with another 15-year-old girl on an occasion at a park near to Dunfermline Town railway station between July 1 and September 30 in 2017.

Braidwood also got a 14-year-old girl to carry out an oral sex act on him in Rosyth on the night of the rape.

He also admitted breaching bail conditions and uttering threatening and abusive remarks at an address in Cowdenbeath. In a message he posted about two girls, he wrote, “I’ll get them both killed.”

The prosecutor said that in October last year police took possession of screenshots which showed the user name ‘Jimmy Savile’ and the profile picture of Braidwood.

Lord Pentland deferred sentence on him for reports until next month.

Braidwood was placed on the sex offenders’ register and remanded in custody.