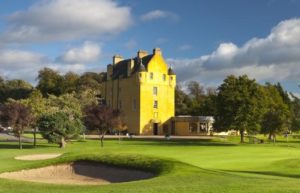 A golf club professional has told a trial he was violently assaulted in his shop in a dispute over a pair of sun glasses.

He told the trial that he was also choked and threats were made about his wife and family by unhappy customer Lawrence Ogilvie.

In the dock at Dunfermline Sheriff Court was Ogilvie (69), of Glen Moriston Drive, Cairneyhill.

He denies that on 13th August last year at Dunfermline Golf Club, Cairneyhill Road, Crossford, he assaulted Christopher Nugent by seizing his clothing, pulling him, threatening him with violence, pulling him over a counter causing him to fall to the ground, straddled him, pinned him to the ground and seized him by the neck, all to his severe injury.

Mr Nugent, 43, told the court the incident had happened after Ogilvie came in to club shop early in the morning with an inquiry about a pair of sun glasses he had bought there previously.

Mr Nugent said after the purchase Ogilvie had not been happy with the lenses and he previously ordered another set for him.

“He grabbed me by the collar at the front of my neck and shook me back and forward. He was extremely angry. He grabbed my left arm and I was pushed out to the shop floor.

Defence solicitor Roshni Joshi accused Mr Nugent of lying and put it to him he had been the aggressive one with the injury caused when the two men fell to the floor in a struggle.

Mr Nugent denied this. The line of questioning did not go down well with some people in the public gallery, which brought a warning from Sheriff Pino di Emidio.

He said that if there were further interruptions the culprits could be taken to the cells for contempt of court.

The trial will continue on 29th November.