George Flannigan (25) was found with videos placed in the category for the most serious content.

Flannigan, of Stirling Road, Milnathort but currently in jail in England, appeared for sentencing at Dunfermline Sheriff Court.

He previously admitted that between 11th March and 3rd April 2017 on the A92 Kirkcaldy to Lochgelly road, at his home and elsewhere he was in possession of indecent photographs of children.

Flannigan, who previously lived in Lochgelly, was found in possession of three videos which were at the most serious level, category A.

The court was told Flannigan was from the travelling community but had settled down with his wife and they have two children together.

Sheriff Charles MacNair said, “These films were of the worst sort.” He jailed Flannigan for 190 days to run consecutively to his current sentence.

Flannigan was also put on the sex offenders’ register for 10 years.

Flannigan is currently in jail in Durham, having been jailed for three years and 11 months and months for fraud at Teesside court in December.

He was part of a gang of bogus workmen preyed on elderly victims scamming out of thousands of pounds. 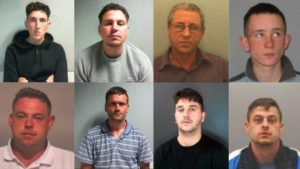 Flannigan was also jailed for 15 months at Elgin Sheriff Court in May last year for similar crimes.

He took advantage of three Buckie OAPs in their 80s to pocket cash by grossly overcharging them for work.